Effects of School on Religion 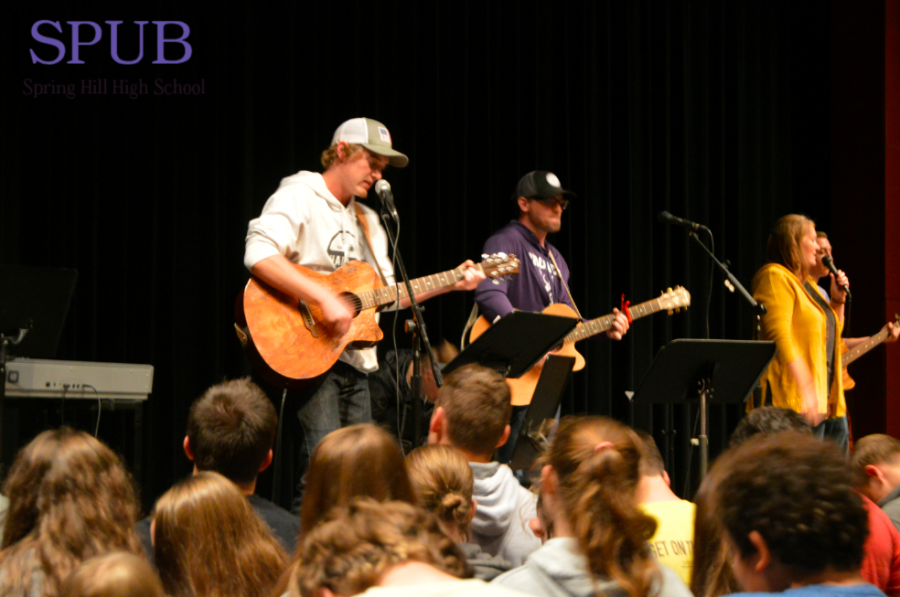 On Oct. 9, Noah Hunt, 12, helps lead students in worship at Fields of Faith. Usually out on the football felid this year, however, it had to be moved inside to the auditorium due to rain (Photo by K.Clooney).

Religion. It is the backbone of societies and cultures. It has promoted war, fostered peace, and governed empires since the dawn of man. High school, like a battlefield, is hard enough on its own, more often than not high school is testing on anything and everything students hold onto; this includes their own religious beliefs When these religious beliefs, and values are placed under scrutiny, students are forced to decide what they truly believe in. In high school, students often struggle with finding themselves and finding their purpose.

“It makes it very hard to follow my faith. There are tons of things here that will test me and my faith. But it has also made me stronger in my faith because I have to say no and stand up for my faith,” Ashley Pahl, 10, said.

Students are often influenced by the people surrounding them, whether it be conscious or not.

This peer pressure often targeted towards students with religious beliefs and values, through judgement.

This is the form of peer pressure that a lot of religious students deal with. It makes it harder for them to feel as if they fit in.

“I feel like I get judged by having faith and believing in God,” Saydee Shannon, 10, said.

Being religious as a student is hard, especially as you’re growing up. Often students try to fit in with their peers and work their hardest to match the trends which often tags along with the want to fit in with everything going on within the school.

“In most of middle school I didn’t really feel religious at all because most people didn’t associate with a belief or were atheist,” Zack Knust, 10, said.

Typically, students also tend to find a deeper reason for their faith after being influence by their peers and tested in their faith. This leads to them searching themselves to see if what their reasons for faith really are, if there are any at all.

“I find much more enjoyment in life having faith in Judaism whether than no faith at all,” Knust said.

Sometimes, people search for a ‘reason why’ because it’s their form of a purpose, or something they find reason in.

This can lead to students trying to figure out if they believe in something, this leads to curious minds.

“I believe there is a higher being, but I’m not sure who or what it is, and if they created the universe and all its contents,” Kastin Galloway, 10, said.

People can find purpose through many things, and if they choose to look into a religion there is tons of information out there.

“Attending different studies, classes and camps have really played a big role in my life. My religion affects everything I do. I attend FCA, Fields of Faith and bible groups with people from our school,” Hodge said.

Often times students forget that the impact from their peers affects the things they do, their religious beliefs, thoughts and values. These things are up to them, but they still can be affected by other things going on.