Review: Crazy For this musical 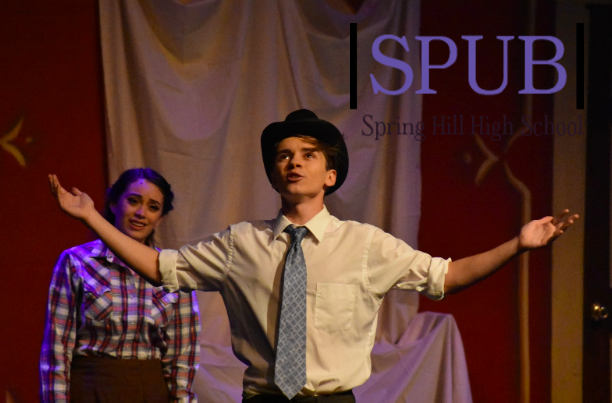 During a dress rehearsal, Remington White, 9, sings as his character Bobby Long, to Polly Baker portrayed by Isabel Infante, 11. Since White is a freshman this was his first time performing on the high school stage and was the main character (Photo by I. Williams).

The Spring musical had its last show on Saturday, and I am happy to say that it was one of the best musicals I have seen the school put on. Unfortunately, I was only able to attend the matinee, which is effectively the last dress rehearsal, so this should be noted as this review goes on. The show that was chosen this year was “Crazy For You,” and it made me crazy for this musical.

The set was simple looking, even though you could tell a lot of work was put into making it look old and rustic. In this instance I believed the sets perfectly match the feel of the musical and were well done. Some of the costumes may be a different story.

Most costumes were muted and weren’t flashy, just as you would expect from an old country town in the 30’s. The only problem I had with the costumes was the bright pink showgirl costumes. They were very revealing to have high schoolers were even if they were appropriate for that time frame. There were many instances were the eight girls wearing these costumes showed too much during a dance.

The singing on the other hand was great in my opinion. At some points it seemed the actors had a hard time singing loud enough for the audience to understand what they were saying. Sometimes this made it hard to follow the storyline, but ultimately it didn’t truly hurt the performance. The ending bows were not smooth at all, no one seemed to know when to go up or what the choreography was when it was their turn to bow. The only show I was able to attend was the matinee on Thursday, which was to be considered the last dress rehearsal so some of these things had time to be fixed and weren’t perfect yet.

The dancing, singing, and humor made the show, and it was so much fun to watch! This musical was funny, well-casted, and all around enjoyable. It has to be one of my favorites that I have ever watched the school do, and I can’t wait to see what else the theater department has in store for us this later this year.