The Start of Basketball Season: Two-a-Days 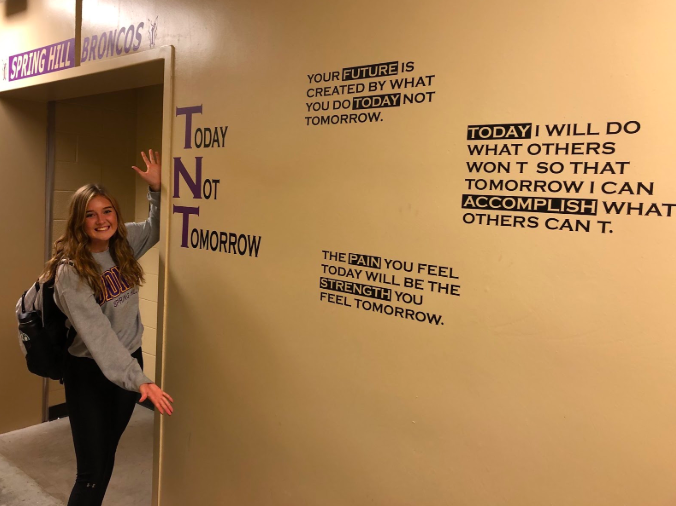 Varsity player, Avery Anderson, 12, shows off the locker room wall decorated for the upcoming basketball season. Their motto for this year is “TNT,” which stands for “Today Not Tomorrow” (Photo submitted by Clay Frigon).

As the days grow shorter and the air becomes colder, it is obvious that the longest athletic season is coming to be: Winter sports. This week, basketball has gotten off to a hot start on Monday and Tuesday by having two practices a day; one in the morning and another after school. They like to call these two-a-days.

“We have two-a-days in order to prepare ourselves for the season,” Clay Frigon, varsity basketball coach, said, “Since we usually have a short turn around, especially when we factor in thanksgiving break, if we can get four practices in like we have the past two days, that’s even better for us as far as getting everything in before our first game.”

Most people would think that the athletes would dislike the two-a-days due to the early mornings and countless hours of practicing, but surprisingly, most of the athletes can respect it. It seems like a lot of work now, but they know it will all pay off in the end.

“I personally think that two-a-days are necessary because it helps pull out the weaker kids and see who’s dedicated to the sport,” Julia Hess, 11, said.

While Monday and Tuesday were very exhausting for the basketball team, the athletes are very thankful for some changes that have come to be. In previous years, the basketball teams had two practices a day, everyday, for the whole opening week of the season. That is ten practices in five days. In recent years, parents of the basketball athletes have also come together to make the tiring days more obtainable. They bring in breakfast for the players, and set up a table for them to come by and get their breakfast for the day.

“With the changes of PLC, I felt at the end of the day they could sleep in instead of practicing at 6, and waiting around until 9:10 for school to start.” Frigon says.

The late starts interfere with morning practices because the practices still end at 7:30, which leaves an hour and forty minutes until school starts. Frigon also later explained how hard it is to get things done in the aux gym in the morning with so many girls, compared to having the main gym in the afternoon.