Cheerleaders Compete at State, on Nov. 23 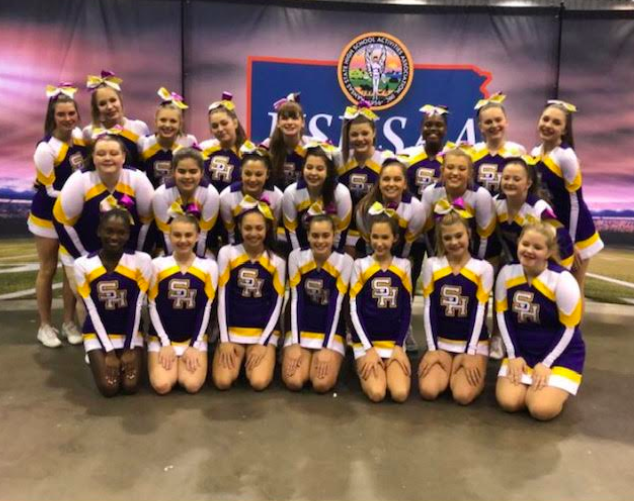 On Saturday, Nov. 23 the SHHS Cheer Team competed at KSHAA Game Day Competition. They placed tenth in the 5A division (Photo Courtesy of KEdigar).

Most of the time you see the cheerleaders at football games or basketball games cheering for the Broncos on the sidelines. However, on Nov. 23,  the cheerleaders took the spotlight and competed against 16 other 5A cheer teams with parents, friends and coaches cheering them on instead. The KSHAA Game Day Competition is a fairly new competition that allows for cheerleaders from all over Kansas to compete with Game Day Routines. The teams are required to compete with a cheer, band chant and fight song. The teams are judged on crowd involvement, overall spirit, and their performances as a whole.

Throughout the whole day nerves were on edge but the cheerleaders never lost their positivity or smiles. Before each performance there was always a rush of nervousness but also excitement. After all the performances it was time for Finalists to be announced. The cheerleaders got 10th overall in the 5A division.

“I would say from where the team was last year and where we are this year it has been leaps and bounds of improvement. “ Maggie Dugan, Assistant Cheer Coach said.

Even though the girls didn’t get into finals they were incredibly proud of all of the progress they made and can’t wait till next year to compete once again.

However, before they were in the spotlight lots of hard work had to be done. preparing for this competition takes a long time and requires a lot of work. The  cheerleaders practiced for many weeks constantly trying to look perfect.

“[The hardest part of prepping was] mostly getting everybody together and not being sick or having appointments. Having 23 people in one place all the time is kind of  difficult.” Kelly Ediger, Head Cheer Coach said.

Going to State is a big deal to the cheerleaders but not many students recognize or even know that they go to such a big competition.

“I wish it was a bigger deal and I hope it does become a bigger deal because cheerleaders really do hype up the school and we’re positive and I think without cheerleaders our school wouldn’t be the same,” Said Daley Browning, 9 said.