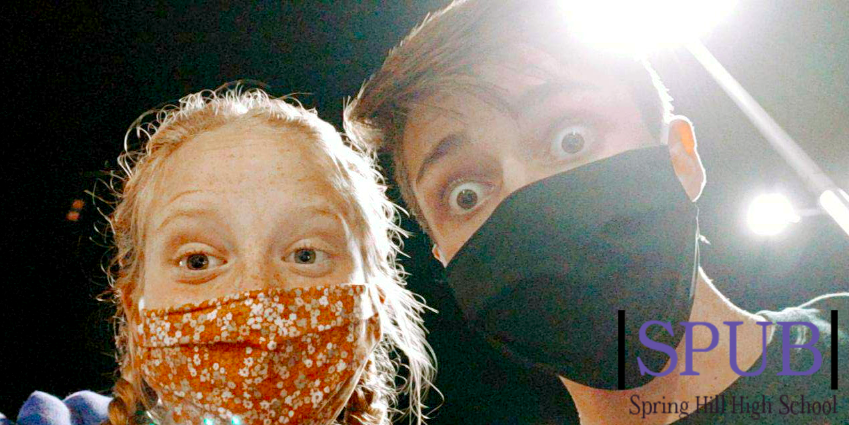 As we all return to in-person schooling, I can't help but feel nervous about what's to come. I'm worried that people aren't treating the situation with as much severity as it deserves (photo credit L. Haney).

On Sept. 28, I, along with over 100 Spring Hill residents, tuned in to watch the board of education meeting live. I, along with the majority of said residents, fell asleep before they reached a verdict at one in the morning. I woke up the next morning to the news that we would be returning to school in-person.

I have always loved school. I lived for every aspect of it, except maybe recess, when I was younger. Then I was homeschooled, which was nice, but I missed being in a building. I missed being in a classroom, eating in the cafeteria, just the most mundane things. That’s one of the things I’ve loved about high school, is the experiences that you can’t get unless you’re in the building. I, more than most, should have been happy to hear that we were going to be in the building again. But I wasn’t. When I read the texts I had gotten informing me that we were returning in a matter of weeks, the only emotion I felt was fear.

At musical rehearsals, I have witnessed many a cast member wear their mask incorrectly – as in, not covering their nose at all – or pulling it entirely off their face so they can be heard better. I have heard students in classes talking about how annoying it’s going to be to social distance, and how they don’t think they’re going to follow social distancing procedures or the one-way hallway system that has been created.

I have at-risk people in my family. I don’t want to become infected and risk putting them in the hospital. I do not want to have to be isolated in my room, terrified, wondering if I accidentally spread a deadly virus to them. I want to be able to hug them, and sit next to them at the dinner table.

Everyone keeps talking about how negatively remote learning affected their mental health. You want to know what really hurts it? The constant anxiety that encompasses you every second as you sit next to people that do not understand that their actions carry the risk of killing other people. The fear you feel when someone sits right next to you, not wearing their mask correctly, and proceeds to cough all over you. When people touch all over the front of their masks, then proceed to hand you something. When they share writing utensils. When they sit too close together while unmasked during lunch. When they neglect to sanitize their hands properly when entering/exiting a classroom, and a million other little things that have ramifications far past what they intend. Yes, you only pulled your mask down for a few seconds so someone could hear you better, but when you did thousands of droplets escaped through your mouth and are now in the air. If you are sick, and if someone inhales those droplets and then goes home, you run the risk of infecting an entire family.

So please wear your mask, and do it properly. Social distance as much as you can. Wash your hands well, listen to your teachers, and sanitize your desks. But above all, stay safe.