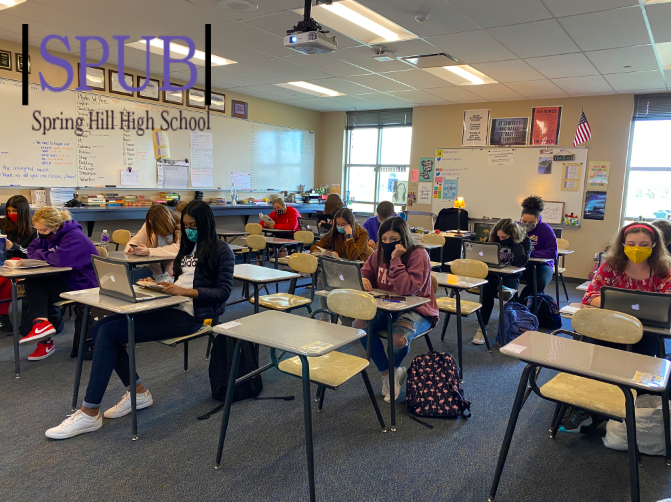 Students work independently on their assignments in Dystopian Literature (Photo by T. Dent).

Not everyone knows what dystopian literature is. If they don’t, they might be surprised by what they find when they start the class.

As described by Weltz, dystopian literature is “Literature that focuses and explores themes and concepts in relation to the social and even sometimes political structures and kind of what appears to be a nightmarish world.”

Even though the students don’t live in a dystopian society, there are still reasons to learn about them and what they are like.

“It is easy to see our little bubble of the world as, you know, this happy, cheery little place. Even when there are problems. We live in this isolated, little bubble and dystopian themes occur in the world around us, but it’s more of a trickle effect. So, as we see things occurring, we need to go ‘Wait a second, I’ve read about this in this book and it was way more exaggerated, but that made me really uncomfortable. Is this a version of that?’ So they can apply those things to the daily world,” Manning said.

This is Manning’s first year teaching dystopian literature and Weltz’s second. As they are both still new to this class, switching novels will provide them with the notes the other took while teaching their first novel. It will make it easier for them to carry on with the next novel, since they will have the notes from the other.

“It’s kinda killing two birds with one stone, because then when we’re done teaching we can swap and the other person will benefit from the other’s work. So we’re getting twice as much work done in half the time,” Manning said.

Teaching different starting novels won’t change anything for the students. It will simply be backwards compared to the other class. They are both still going over the same novels and concepts, just changing the order. Students will still have the same experience in dystopian lit, just a different teacher. Both teachers will provide their own unique outlook that will surely leave the students wanting more.