Government Class in an Election Year 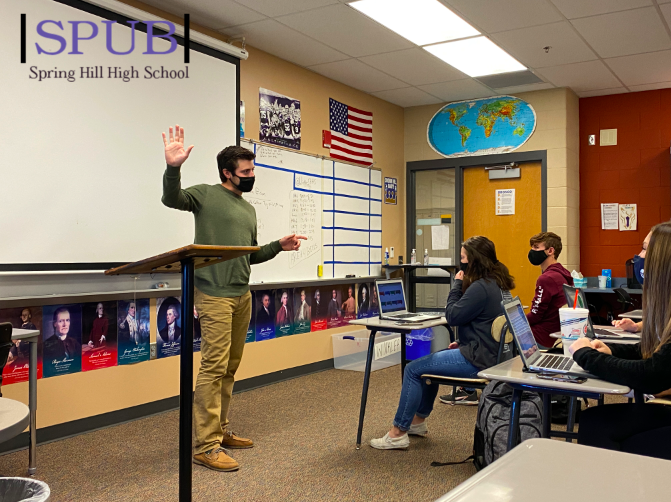 On Nov. 2, Alex Winkler, history teacher, talks to his fourth hour government class about the upcoming presidential election. The class has been following the election and discussing the entire process (photo credit T. Dent).

All seniors are required to take the semester-long government class in order to graduate and to better understand the way American democracy works and benefits the population. Once every four years, however, the class becomes more than just another history credit. With a good chunk of seniors turning 18 and able to vote in that year’s presidential election, this class helps them understand all the ups and downs and nuances that come with a presidential race.

“It’s a good time to be in Government class, because of the amount of discussion and things that come up. There is never a dull moment in the news cycle during election season,” said Alex Winkler, government teacher.

One of the hardest parts of following the news cycle is biased reporting on both sides. However, Winkler found a way to use that to a voter’s advantage.

“One thing I always recommend is read the news from both sides. Get on two websites that have opposing views, or go on one website that leans more conservative and one website that leans more liberal, and read about the same issue. You’ll often see different quotes and different perspectives put on it. So I encourage people to do that even if they are confident in their political beliefs just to see what the other side is saying, so you know what someone who believes a little differently than you believes about a topic,” said Winkler.

But for those who would like to see a completely unbiased source, Winkler has that covered too.

“In terms of an unbiased source, a good place to go is a website called On The Issues, where you can just see where candidates’ stances are ‘on the issues’ hence the name. You can see how they’ve voted in the past and things that they’ve said, so it allows students to see which candidate believes what they believe. There’s a very good political quiz on a website called iSideWith, and it’s non-partisan. It asks a series of questions, and [your] answers will match you with a presidential candidate that believes most similarly to you,” said Winkler.

Another thing Winkler hopes to impart on his students is the importance of voting in all elections, not just the one that will decide the president.

“I think students forget, and I think adults forget too, about the importance of voting for your representatives, because the majority party in the House or the Senate has a great deal of influence on the laws that get passed in the country. Stressing the importance of not just voting for president, but knowing who your Senators are and knowing who your representatives are, and actually making an informed voting choice is something students need to know,” said Winkler.

According to Winkler, however, a lot of students seem to stand strong in their opinions.

“I’m finding that young people who are excited to vote are often fairly convicted in what they believe, be it one side or the other.  I actually see for the most part from Spring Hill students high schoolers making informed choices based on what they truly believe,” said Winkler.

In an election, it is important for those voting to be able to make informed decisions about the future of the country. Government class helps students become more informed, and pushes them to understand the vital role each and every person plays in democracy.