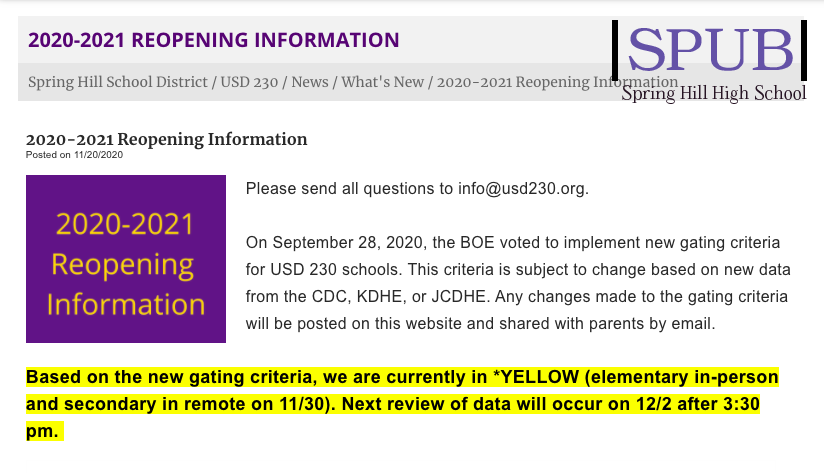 On Sept. 28, the Spring Hill Board of Education changed the district's gating criteria. The new system has a lot of though and effort behind it (photo credit T. Dent).

When the board of education was trying to get secondary school back in person, they completely changed the gating criteria that had been adopted previously. Some have wondered how the new system works and how it was created.

“The gating criteria were derived from guidance published by the Centers for Disease Control,” Brad Wilson, Assistant Superintendent, said.

The information that the school board got is called “Indicators for Dynamic School Decision-Making,” which is different from a “gating criteria.”

Wilson was the person responsible for the new system.

“I used the CDC guidelines and weighted them based on whether they were primary or secondary indicators to give a point value for each level of risk determined by the CDC. Then those points are added to give a single number to indicate the overall risk of transmission,” said Wilson.

One of the reasons the new criteria was adopted was because of its point threshold.

“This set of criteria has a higher threshold of community transmission before students are moved to remote learning, which was the biggest change for schools. That is the essential reason, I believe, that led to the change in the criteria used,” Wilson said.

Wilson is also responsible for monitoring case levels in the area.

“On Wednesday afternoon, I simply go to the data reporting sites as outlined on this page: Determining Numbers. Depending on the specific level for each criterion, a point value is determined and summed to determine the total,” said Wilson.

The school district put a lot of time into the gating criteria, but it still isn’t a perfect system.

“The gating criteria basically does what it was designed to do, but what it is designed to do is inherently flawed. It is designed to make an extremely complex decision involving a multitude of quantitative and qualitative factors using a few quantitative data points. It won’t ever do that job perfectly. It gives people a sense of comfort knowing the decision to move between learning modes is dependent on scientific-based factors that are measurable,” Wilson said.

Now that the criteria has sent secondary back to remote, many students are upset that they do not get to remain in person. However, there is a possible solution.

“The only suggestion I have for improving this situation is for all of us to sacrifice by modifying our behavior enough to protect each other from transmission of this disease,” said Wilson.

As a district things are being handled with the awareness of the safety in the community. Nothing will ever be perfect with this system, but that’s only because everyone in the community is learning and adapting to a new way of life.