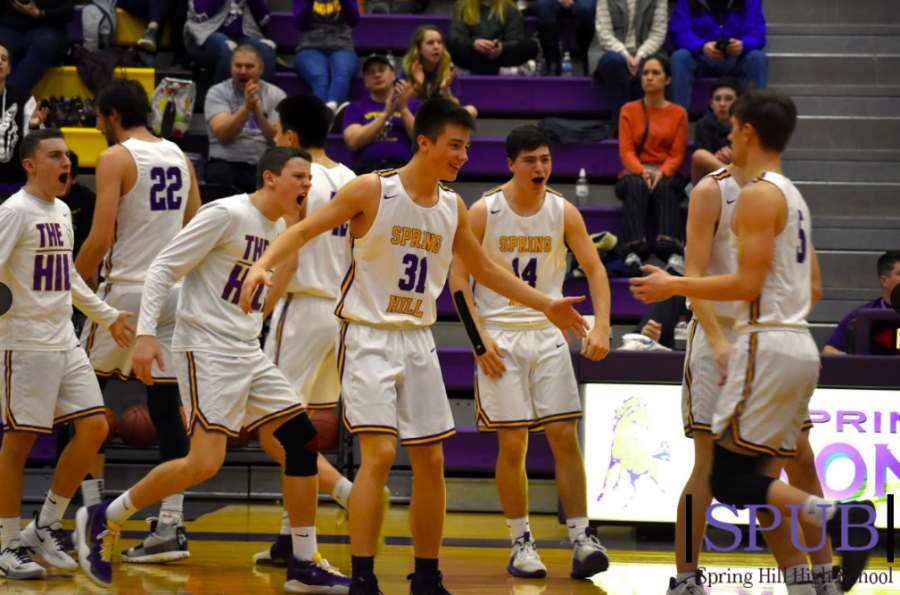 On Feb. 28, 2020 the Boys Varsity basketball team cheered after a basket was made. This season, however, they won't be bolstered with the same level of cheers from the crowd (photo credit O. Lawson).

On Dec. 8, KSHSAA voted 54-24 to limit spectators at all winter season events until Jan. 28. This is a change from their previous recommendations, which would not have allowed for any viewers. However, there are stipulations to this rule.

“Two parents or guardians of a student [will be allowed]. Say your dad and little sister come to a game, only your dad would be admitted to a game. Your little sister would not,” said Gary Howard, Activities Director.

Parents and guardians watching will not be limited to just the families of players.

“It’s parents or guardians of participants, [who are] defined as players, coaches, student managers, cheerleaders, dance team, [and] pep band,” said Howard, who went on to add that the school would likely only see players and cheerleaders at the games until at least after winter break.

Luckily, disappointed students will still be able to watch the games.

“We’re gonna do our best to livestream [the games], and I know livestreaming isn’t great, but [students] just have to understand that everybody’s making sacrifices right now. A month away, or two months away, hopefully things will start loosening up and we can get kids back in the stands,” said Howard.

After Jan. 28, there will still be about a month left in the wrestling and basketball seasons for students to attend live and in-person, assuming it is safe to do so.

But no matter if students are on the court or off, the administration is putting the health and safety of the athletes and students  first.

“I want to do what’s best for our kids, and if they tell me that we have to have athletics, then I’m gonna do whatever I have to do to help them be safe and successful,” said Howard.

It is still important to stay safe when going out in public; limited spectators and livestreams present an alternative, safe way for students to watch games and cheer on their Broncos.