Unrest in D.C.: An Overview 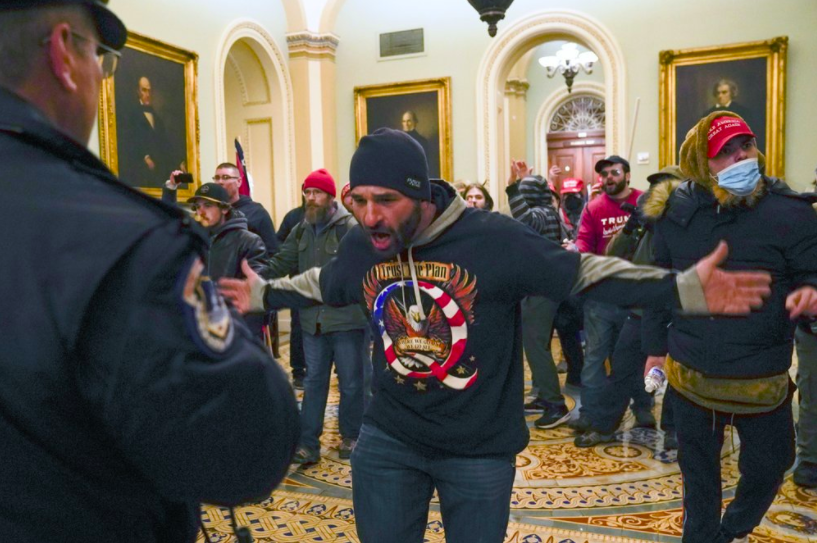 On Jan. 6, a man yells at a Capitol police officer stopping him from forcefully entering the Senate chamber. This man is one of hundreds that stormed the Capitol, hoping to disrupt the vote count that would certify President-elect Joe Biden's victory (photo courtesy AP News).

The nation’s capital was rocked to its core on Jan. 6 after an armed mob stormed the capitol building. Using riot shields and various other materials, a large group of people broke windows and forced their way into the Senate chambers. This insurrection came after weeks of President Donald Trump sowing the seeds of doubt about President-elect Joe Biden’s victory.

“We will never give up, we will never concede,” said Trump just hours before the capitol building was breached for the first time in over 200 years.

Members of Congress were forced to take shelter as the rioters stormed the building, disrupting the official count of the electoral college votes that would certify Joe Biden’s victory in the 2020 presidential election.

The mayor of D.C. imposed a 6:00 p.m. curfew for the district, saying that no one outside of essential employees were allowed to be out past this time. The full D.C. national guard was mobilized, along with troops from Maryland, New Jersey, and Virginia.

While the numbers are changing as new information is reported, at this time four people have died and over 50 have been arrested.

Articles of impeachment are being drawn up against Trump by Rep. Ilhan Omar.

But at the end of it all, at around 3:45 a.m. on Jan. 7, Congress did what they had set out to do, and officially confirmed Joe Biden as the next POTUS.