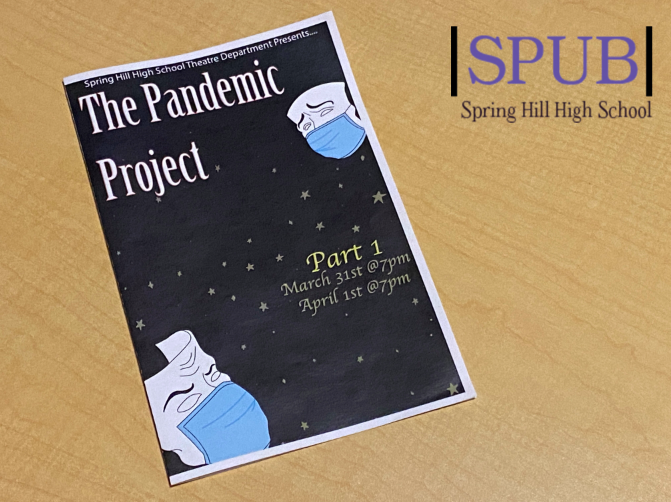 "The Pandemic Project" is the theater department's unorthodox spring production. Part one was performed March 31 and April 1, and part two will be performed April 9-10 (photo credit T. Dent).

This year, the traditional spring play is looking a little different. Instead of the typical three days of one show, Brian Walrod, theater teacher, has adjusted in an attempt to better work through the pandemic. The show, titled “The Pandemic Project,” is a series of unconnected scenes split into two parts. On March 31 and April 1, the cast performed the first part of the show, which was a showcase put on by the acting and repertory theater classes.

The showcase was split into two acts with a 10-minute intermission. The first act had five scenes with no more than four people, and the second act was two longer scenes, one that had the whole acting class and the other that featured the entire repertory theater class.

Theater has always been a form of ‘escapist’ entertainment, at least for me. Productions transport audiences to a different world for a while and allow them to take their minds off their problems for a little bit. That was not the case with this show. Nearly every scene was centered around the pandemic, and the ones that didn’t have it as a focus almost always found a way to sneak it in there (with three exceptions). It was kind of like a constant abrupt return to reality. I’m not saying this is necessarily a bad thing, it was just definitely not what I was expecting.

When asked if I actually liked the showcase, it was hard to say. On the one hand, it was clear that the students had put a lot of thought and effort into their performances. They were well-memorized, had good chemistry with one another, and they interacted very well on stage. However, the actual scenes they were performing were hard to get into. Very few of the jokes landed (through no fault of the actors…they were just poorly-written), and it was hard to truly connect with any characters since they were onstage for less than 10 minutes.

I will say, however, I enjoyed the second act much more than the first one. The scenes were longer, and I found them more amusing than the ones shown before intermission.

There’s not much to say in the way of costumes or set, as both were incredibly minimal; all but one of the scenes had the actors wearing ‘street clothes,’ and only two scenes required a ‘set’ more complicated than folding chairs (and even then, it was kept to the bare essentials).

Would I see this show again? No, but I don’t think it was supposed to be the kind of show that people could watch again and again. I will definitely be seeing part two, though.

Tickets are $6 at the door, and there is limited seating available.