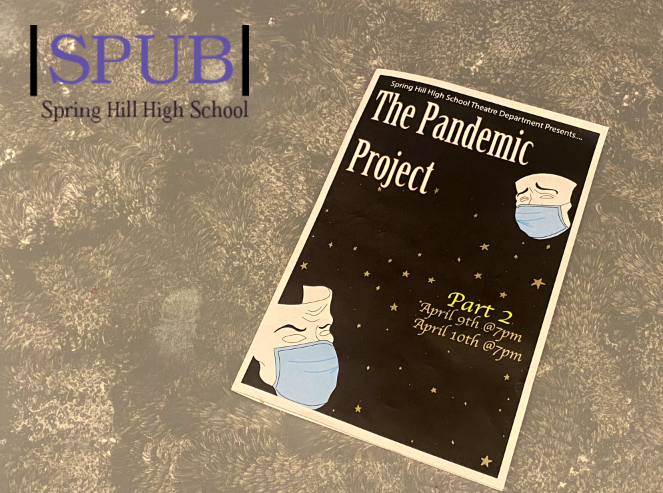 Part two of the spring play, "The Pandemic Project," was more entertaining than the first in many ways. However, it also suffered from a lot of the same problems (photo credit T. Dent).

Part two of “The Pandemic Project” has officially debuted, and there is only one show left until the spring play is over. Continuing the approach of its first section, this consisted of a series of short skits and sketches, mainly centered around the pandemic and all of its many effects.

When seeing the first part, the format and subject matter – i.e. most of it talking about the pandemic – took me a little off guard (as I mentioned in my previous review). However, knowing that I should likely expect this from part two as well, I was a little more prepared and did not go in expecting this to be a ‘normal’ show.

With that being said, I did find this show more entertaining than the previous one. The skits were more varied, they were shorter, and a majority of the time they were funnier.

I enjoyed the shorter length of the scenes, because it kept the show going at a fast pace, and it never felt like any of the scenes had ‘outstayed their welcome,’ so to speak. However, the downside was that it allowed basically no time for set up. The biggest example of this was the scene titled “Flaky Lips,” which featured two characters named “True” and “Legit,” both barefoot and wearing brown tunics, seemingly running away from something. Their conflict was unclear (people were sick? Dying?), and both seemed to be scared of the other yet unable to see them. With no actual time being devoted to introducing the characters, the whole thing was a bit confusing.

There was a similar problem with nearly all of the monologues sprinkled throughout – the audience didn’t know who the character was, or what problem they were facing. It was a good exhibition of acting, to be sure, but it was hard to connect to the scenes because it was nearly impossible to figure out what was going on.

Overall, both parts of “The Pandemic Project” had the same problem; a talented cast was given a script that was mediocre at best (and hard to watch at worst) and told to make the best of it. They obviously did the best they could, and the performances themselves were well-executed, but the unengaging script made it hard to truly immerse oneself in the show.

Audiences can see the last showing of part two at 7 p.m. on April 10; tickets are $6 at the door.