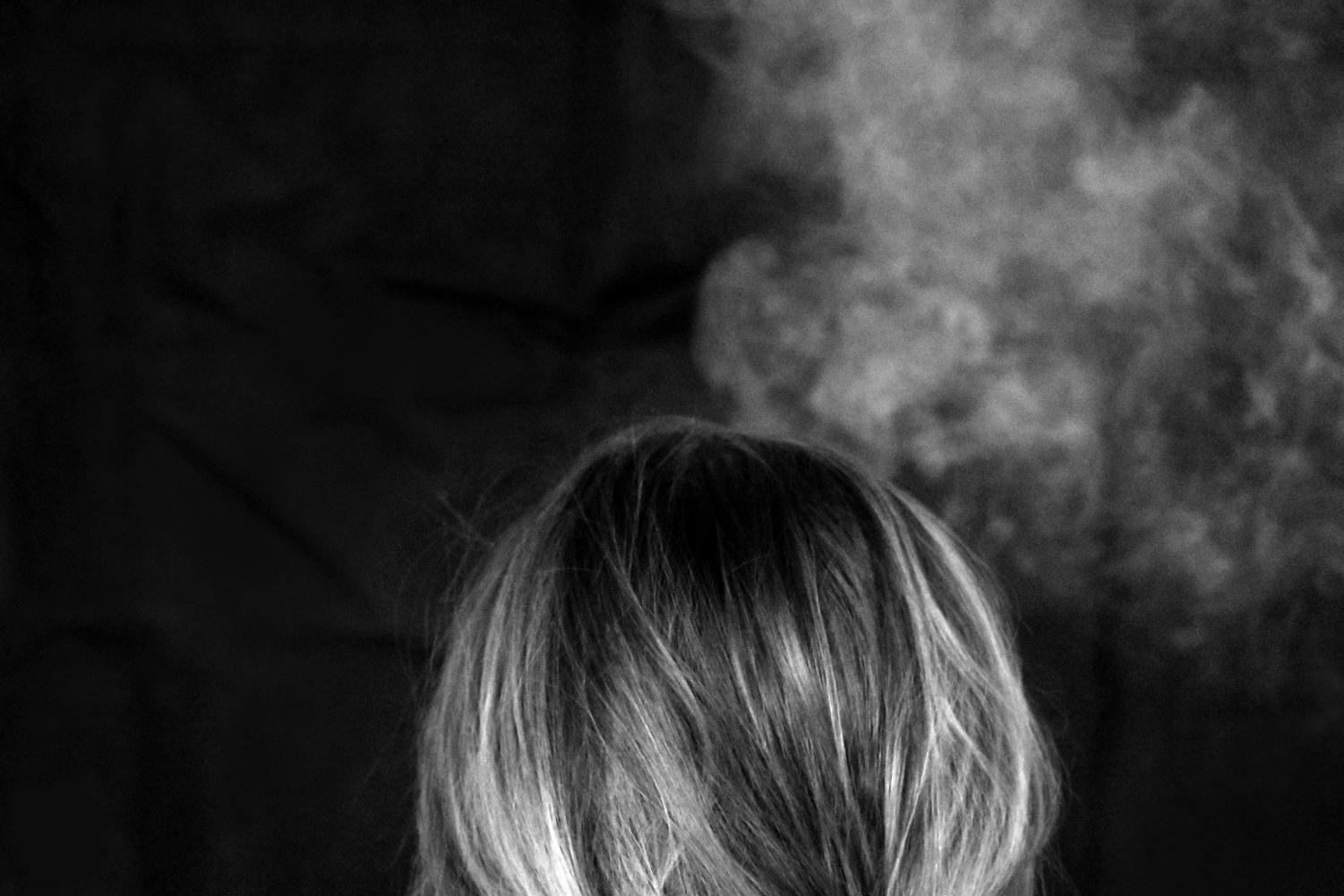 Hear the Voices of the High School Vapers

Names have been changed to protect identities.

“It makes you feel very light, sort of. Sometimes, if you get a stronger buzz, it sort of makes it feels like the world is spinning around you in your vision, but you know, nothing’s spinning. Sometimes I get, I call them the shakes. It’s not like your hands are shaking. It’s your vision. Just shakes back and forth without your eyes moving. It sometimes gives you a euphoric feeling, and sometimes makes it a little bit difficult to walk because it feels super light headed. But, yeah it usually helps for stress. It definitely helps for stress,” said Jim, an avid vape user.

Jim started smoking at the beginning of his freshman year then tried vaping and got hooked on it too.

“I didn’t have a vape at first; I smoked cigarettes. I’ve smoked since about the beginning of freshman year, and I’ve hit, you know, a couple of my friend’s vapes. But it was mostly cigarettes for me until I got my own which was, I believe, the beginning of sophomore year. I got my own vape and then from that time I got new ones, went back to cigarettes, you know, stopped for a month or two and you know, then relapsed and got back on it,” said Jim.

After taking a hit, Jim is satisfied, but then he said feels like he needs to take another and he realizes his addiction.

“It’s sort of a weird thing. If I take a big hit, you know, I get my buzz off that first hit. I probably won’t want to hit it again until five to 10 minutes afterward. I won’t start getting the urges until then, and then if I have my own, no problem, just pick it up, hit it again and then put it back down for another 10 to 20 minutes. You start thinking about, I need to go find nicotine, or I need to find my vape. [The urge] usually comes in an hour or two afterwards. Withdrawal effects end up happening like a day or two after you have any nicotine,” said Jim.

To Jim and others, vapes are fairly easy to come by. Their friends and their families could have them and provided access.

“When you’re under 18, you typically have a friend that that is over 18 who would go and purchase it at a gas station or online with their credit card or whatever. Some sites don’t check for age. They’ll just sell to you if you have a credit card,” Jim said.

When other students want their own vape, they can get it pretty cheaply, or they can spend a lot of money depending on what they want.

“The first vape I got, I got it from a friend. and it was like $180 because it was not just like a Juul or a Nord. It was like an actual one that had a tank model.”

A tank is much larger version of a vape where you have a tank to hold the juice these are more customizable.  A Nord is a brand of vapes that is pod based and popular among students. A mod is larger vape that doesn’t work on a pod system. It works by having a refillable tank, the tank is what holds the vape juice.

“And I had [my vape] for about a year. And then I left it out when I went to school and my parents made me smash it,” said Jane.

When a student vapes in school, there is a certain reputation they can develop with others that they can be trusted not to snitch.

“Vaping, as a social [activity, affects my life] positively. You can make a lot of friends surprisingly just walking around somewhere you know showing up to like a party or in the bathroom with a vape, and everyone would be like, yo, you’re cool now,” said Jim.

Vaping doesn’t innately make a student cool or popular on the broad scale; however, among other students, people who vape can be accepted into their circle.

“If I have my own on me, they’ll sometimes ask me to hit it. Other times, I’ll recognize them as someone who, you know, wouldn’t tell on me if I you know, let them hit it, I’ll be like, ‘yo, you want to rip off this?’ And they typically take it. I wouldn’t just offer contraband to, you know, random people,” said Jim.

When students share vapes they do run the risk of getting caught with something that isn’t theirs.

“The [vape] I got caught with last time wasn’t mine. But the last one I had I sold it to pay for the MIP [minor in possession] charge that I got, had that one for three or four months I traded it from a friend. I sold it so I can pay off the ticket. In that sense it kind of worked [to make me quit] – I guess I don’t have a vape anymore,” said Jim.

After Jim sold his vape, he still had another that was worth about $120 dollars. The punishment isn’t too severe to some students and pretty extreme to others.

“[I think the school should do] something that, instead of just like, telling them, ‘hey, it’s bad for you, it’s not good.’ That we already know -we already know… it’s terrible,” said Jim. “And we’re probably going to either stop soon or not stop and just die. ”