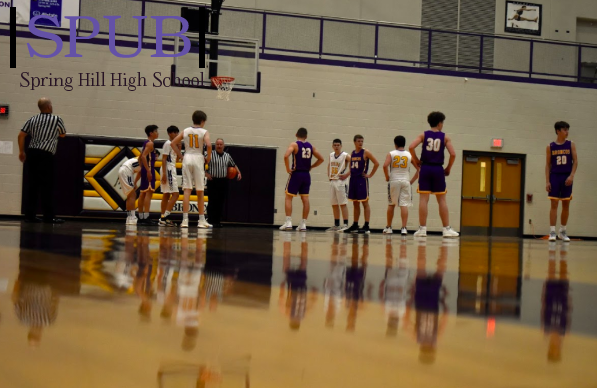 At the end of the scrimmage, Fletcher Pankey, 10, lines up to shoot free throws. He had just been fouled and had the opportunity to get 2 points (photo by EDowd).

At the end of the scrimmage, Fletcher Pankey, 10, lines up to shoot free throws. He had just been fouled and had the opportunity to get 2 points (photo by EDowd).

In movies and even the news, there are often stories of arts being underfunded while athletics receive substantial funding.

“A lot of times theater and other [clubs and activities] have to fundraise all the time while sports doesn’t really have to,” said Rebekah Anderson, 9, theater student.

However the real story is that no athletics teams receive spending money. They are provided with must-have equipment like helmets or uniforms and pay for officials who run games. Everything else is purchased through their own funding just like fine arts or clubs. If they want to buy something new, they have to use their fundraiser money just like arts.

According to Jason Feeback, football coach, the school only pays for their helmets, jerseys, pants and shoulder pads, all of which are basic safety needs for football. Anything else is paid through the annual mulch sale. So, all of their practice equipment or helpful pieces of technology like an instant replay camera, they pay for. Feeback said, they usually have a budget ranging from $10,000 to $15,000 depending on how much money they fundraise.

Like the football team, both basketball teams have no budget. According to Wesley Book, boys basketball coach, they are provided with needed items, like every five years they get new jerseys. The boys do one big fundraiser every year and use it to buy things like nice apparel and travel bags.

According to Clay Frigon, girls basketball coach, the girls do a fudge fundraiser every year, and use it to buy things such as new uniforms to supplement the five year rotation. The girls also work concession stands and host an elementary school basketball camp to raise money. With some of the funds they’ve raised, the team has purchased a special machine that returns the ball back at them.

None of them are able to spend money from tickets or concession sales. That money is actually used to pay for the required items as well as officials.

The arts are funded similarly to athletics. According to Dan Wooge, band director, whenever the band needs necessary equipment, like percussion equipment, tubas, new uniforms, etc, a proposal is made. The band also receives free transportation to many of their events.  The band does not fundraise for the program because it’s classified as a class, but they do fundraise for the trip they go on every two years.

“We have a great district who support us really well,” Wooge said.

According to Georann Whitman, the choir director, the classes are also provided with necessities like music, transportation, contest entry fees and having their robes cleaned. They do one fundraiser, the Night of Cabaret, that they use for things like senior awards.

“I feel like the Spring Hill does a good job of giving us what we absolutely need,” Whitman said.

According to Brett Buffum, theater teacher, the department receives zero school funds- their budget for productions comes from ticket sales. The cost of a production ranges from $15,000 to $20,000 for rights to the musical, scripts, sets, and costumes. However, costumes are often bought by the student. Buffum said he is proud of the department’s self reliance because they could ask for money but don’t have to.

“I just take pride, I guess, in being self sufficient,” said Buffum.

So, this misconception about funding being only for athletics is based on assumptions about where the money comes from and how it is distributed. Many think all the items athletics teams have come from the school, but they actually pay for a great deal themselves. The arts classes are given what they need and are not deprived of money. Everyone works on an as needed basis.