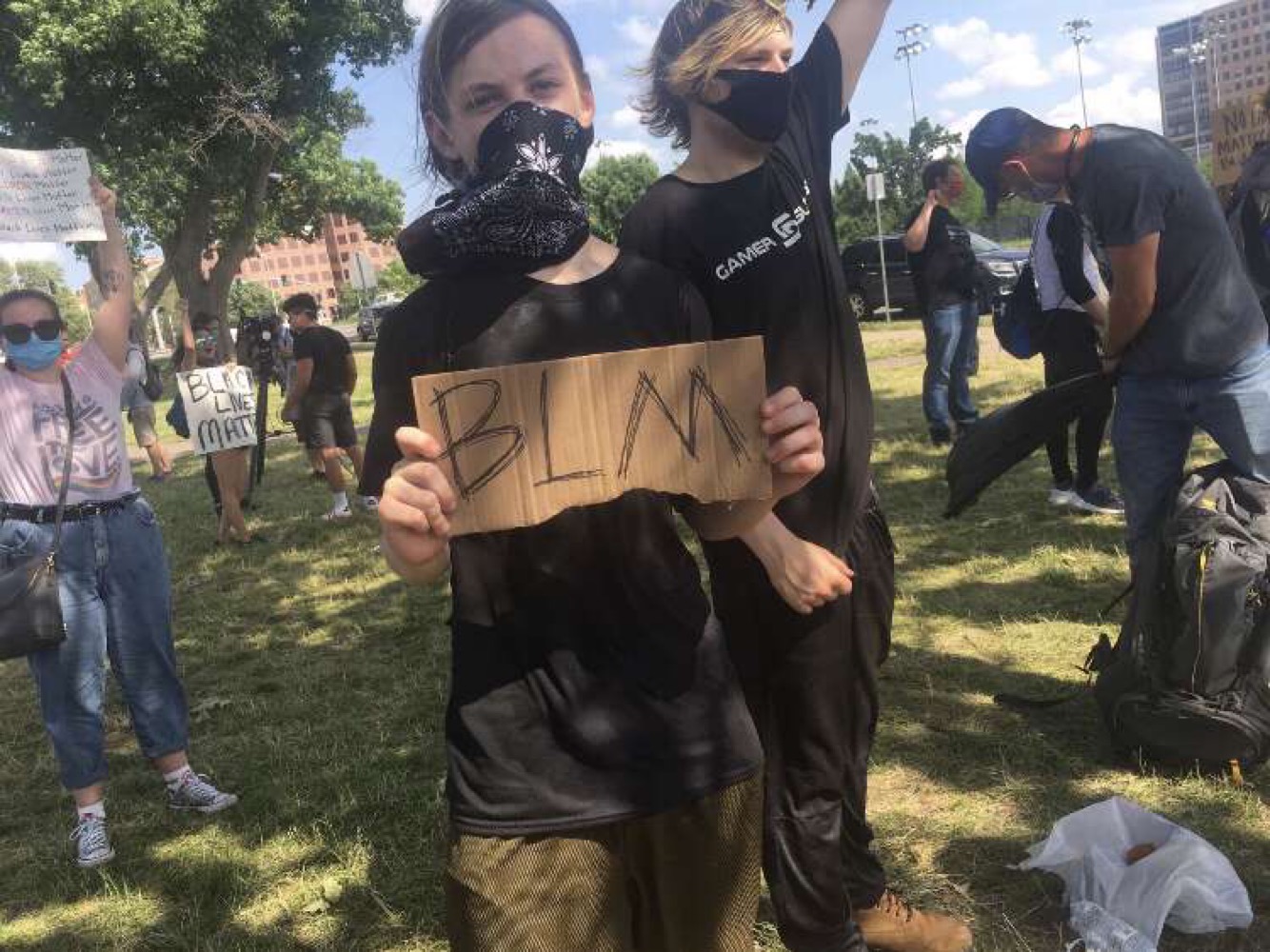 The phrase Black Lives Matter was created in 2012 with the fatal shooting of an unarmed black teenager, after the teen’s killer was acquitted of all charges a year after the shooting. The phrase quickly gained popularity on social media and in civil rights protests as a way to highlight the oppression faced by minorities. Now, after the death of George Floyd at the hands of Minneapolis police officers on May 25, awareness about the movement has spread all over the globe via protests and posts on social media.

The Black Lives Matter movement is affecting Spring Hill citizens as well, albeit in various ways. Even though there are varying viewpoints and opinions regarding the Black Lives Matter movement, most argue that George Floyd’s cause of death is wrong. With some going to protests, some posting information about police brutality and other innocent black victims and some posting against the riots and violence, different people have had different views and degrees of involvement.

“I’ve been signing petitions…I’ve been posting a lot of threads that raise awareness about systemic racism…I’ve also been posting [about] ‘8 can’t wait,’ it’s from Campaign Zero, and it’s eight policies that can decrease police violence, and you can go to their website and see if your police department has these in order – Kansas doesn’t have any of them, so I posted that to raise awareness of that,” said Hannah Hopkins, 12.

“There was this one [post], with someone burning a flag, and then I said ‘these people are not heroes,’ and the next one I had had two [people] serving in the military for us, and I said ‘these are heroes, thank you.’ Then there was another [post] where there was a cop in St. Louis who got shot because of these riots. I said ‘why aren’t we protesting his death?’ because the guy was African-American and he died,” said Chad (whose real name is being withheld at the source’s request).

Then there were those who were blatantly opposed to recent events.

“[A student at SHHS] was saying, I took a screenshot of one of his stories, [the student] said, ‘But that doesn’t make every cop a bad guy. All you stupid f—–’ liberals, niggers, jigaboos, towel heads, faggots, sand niggers, etc etc, are the issue. F— all of y’all,’” Anthony Lakin, 12, quoted from a post he read written by a high school peer.

Many people may read something like this and be shocked to learn that a Spring Hill resident would post such a thing because they believe racism is not an issue in the community.

“Spring Hill, we have a pretty good population of just about all races… But in Spring Hill as itself we never have had any problems with race or anything like that, so I think right now it’s really fine,” said Adam King, 12.

However, not everyone views it with those same rose-colored glasses.

“…the school I attended before [Spring Hill] was way more diverse, and it was easy for me to fit in. I never really knew what racism was until I got into Spring Hill…” said Sylvia Thaithi, 10.

Another student agreed with Thaithi.

“[My old school] was good; I don’t think I ever heard the n-word from a white person at that school, ever. At Spring Hill, [I hear it] all the time. All the time,” said Lakin.

Some residents have different perspectives on the use of racial slurs.

“Black people use the n-word all the time you know, and they throw it around and think it’s empowering, but when a white person does the n-word it’s the worst thing,” said King, adding, “[I hear it] especially [from] the people I hang out around. Yeah, it wasn’t the greatest thing, probably shouldn’t of said [it], but you move on.”

Keeping quiet and moving on after hearing something negative or demeaning being said seems to be a common theme at the high school.

“…I stayed quiet because I didn’t want any of the hate or focus on me. I usually don’t talk in school that much; I’m not really that vocal, so I didn’t want people to think I’m going against [them]. Because this school is predominantly white, their views are totally different from mine, so I didn’t want to be, like, bashed and all that and then ruin my whole high school life because of being vocal,” said Lakin.

Others may have different reasons for staying quiet.

“I think people are scared to report it to the front of the office, so that’s why not many people get in trouble for it…[people are scared] of getting made fun of by the same people, because if you get bullied, and then you’re the one that gets bullied and you go tell the front office, the bully gets talked to and then you’re just going to get made fun of by more people, because the bully’s friends are going to come after you,” said Chad.

This was shown to be true for several students who began to be more outspoken on social media.

“So, in one post I was talking about how at school I used to never speak up. If things were to happen to me, like if someone would want to touch my hair…I was trying to explain that to this person, and I was like ‘Yeah, people pull on my hair sometimes’ and they were like ‘wow I bet slaves would trade spots with you in a second. Making fun of your hair or picking cotton? Me personally I would choose the hair.’…that kind of shocked me. That was something I did not appreciate at all,” said Thaithi.

The person who said this to Thaithi explained their perspective.

“I slid up and said ‘at least [white people] aren’t on a horse with a whip calling you a nigger making you work on a plantation with no human rights. My point was, you don’t have it that bad…I wasn’t making fun, I’m just saying stop acting like your life is impossible just because you’re black. It’s the attitude you have with it if you always complain about people being racist. You’re holding yourself back compared to where you just accept the fact that people are racist bastards and just live life and work hard,” said Jim (whose real name is being withheld at the source’s request).

Others agree with Jim’s views.

“I think [one of the problems with racist comments in the Spring Hill community] is people blowing things out of proportion you know…Like when someone says a joke that is taken the wrong way…People like that take the ball on it and run even though they don’t know what exactly is going on,” King said.

Yes, people do not know what exactly is going on, and that is often the entire problem: a lack of knowledge, experience or perspective.

“[White people] don’t see the problems in the black community and how we’re suffering, they’re blind to it…They’re not educated on what’s going on in the whole United States,” said Lakin.

However, that does not stop people from forming opinions.

“Personally I haven’t done a lot of research about the movement, but from what I hear on the news and other sources I view [the Black Lives Matter movement] as a borderline terrorist organization similar to something like antifa or isis,” said David (whose real name is being withheld at the source’s request).

“I heavily disagree, because first of all, as white people we have no place to tell a whole group of other people that how they’re reacting to years of oppression, to years of being innocently killed [is wrong], especially when we’re the ones who are usually oppressing them. Second of all, I think that’s not true, because again, white people have rioted for so many reasons that are a whole lot less serious and less important than innocent murders. Like sports teams, win or lose. There’s also a case of white people rioting because one of their coaches at a school got fired for protecting sexual abusers. We don’t have any room to say that. It’s also again, like there’s so many white supremist groups that are not considered like ISIS for many people, and that doesn’t really make sense to me,” said Hopkins.

On another note, Thaithi spoke about how labelling people as terrorists can have widespread ramifications.

“I’m fighting for my life. I shouldn’t have to sit here and like when I am getting my brand new car instead of my parents congratulating me, [they’re] telling me how I should approach getting pulled over or even someone random talking to me on the road or being followed and having a whole procedure. I shouldn’t be scared to death to reach for my wallet or things like that,” said Thaithi.

Another problem is many people recognizing the issue, but not being sure what to do. Luckily, there are several options.

“Post links in your bios on social media to places where they can donate, put them in posts, post information about tear gas and pepper spray and what to do if you get tear gassed and pepper sprayed. Try to raise awareness of the people around you that are saying racist things – don’t just let that go,” suggested Troy Gustin, 11.

“Educating yourself is really important,” she said.

A lot of people think just because they are young their voice does not matter. However, it is because of their youth that they must speak up.

“The youth are the future of our nation and it’s important [to speak up] because as these teens are coming up into adulthood they are the most predominant voice and casting the votes for who governs our country,” said Liv Amos, 12.

The future does hold hope in young people’s eyes.

Thaithi said, “One day I’ll finally have a sense of breath, and a weight lifted off of all our shoulders.”